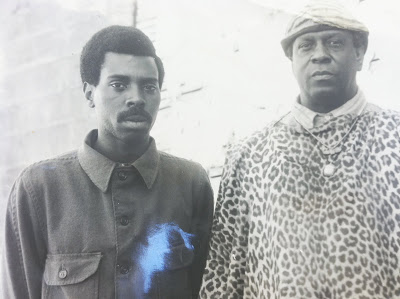 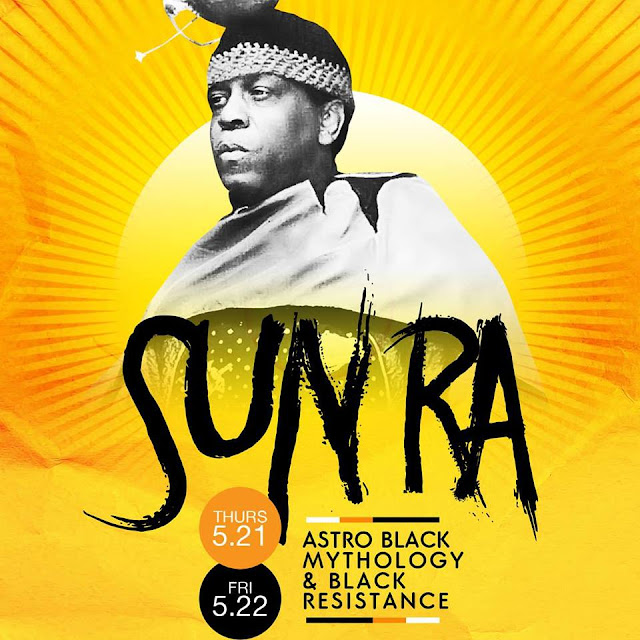 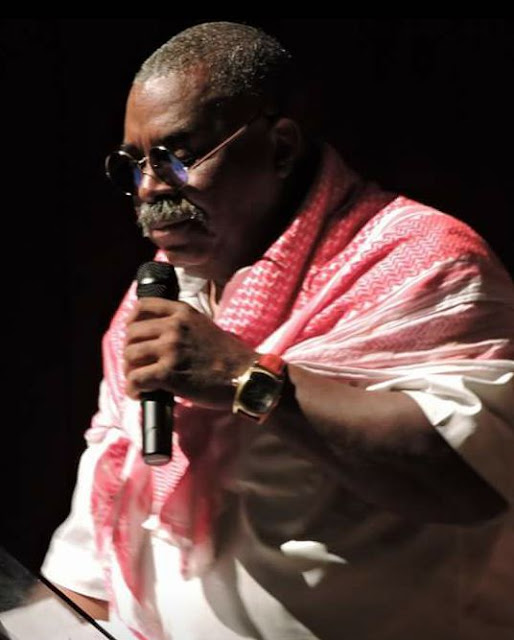 Marvin X reading at University of Chicago Sun Ra Conference, 2015
photo Burrell Sunrise (Let us pray for him at this hour) 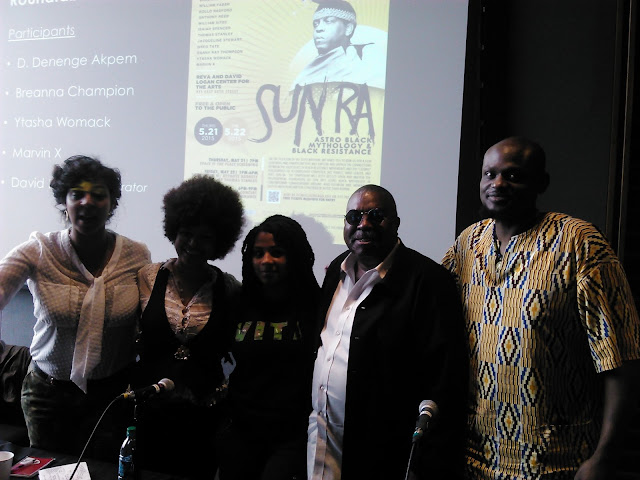 Symposium on Afrofuturism at University of Chicago, 2015 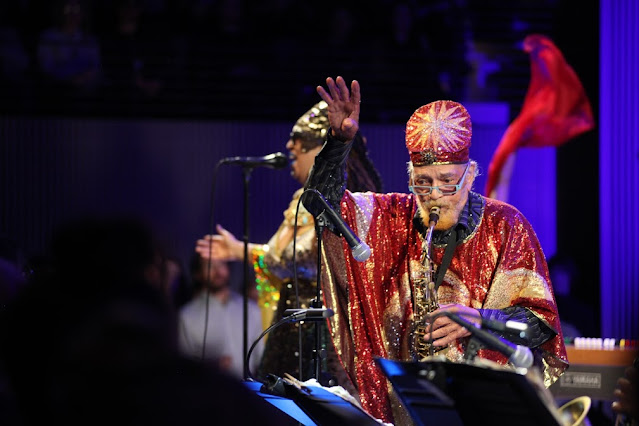 Sun Ra Arkestra at the SF Jazz Festival, under the leadership of Marshall Allen
photo Adam Turner
My beloved ancestor Master Teacher Sun Ra taught me, "The people don't want the truth, they want the low down dirty truth." He chided me, more specifically, chastised me, even better, gave me a verbal ass whuppin' when he arranged the musical version of my BAM classic Flowers for the Trashman, renamed Take Care of Business, see TDR, edited by Ed Bullins, 1968. But when Sun Ra and his Myth-Science Arkestra scored the music for Take Care of Business and I deleted a sex scene, Sun Ra gave me a verbal ass whupping. "Maavin, you so right you wrong. People don't want the truth, they want the low down dirty truth and you took it out when you removed that scene. Stop trying to be so right." And he had told me earlier in our artistic relationship from coast to coast, but especially when we came together in the Bay Area to teach Black Studies at UC Berkeley and when he performed the music for Take Care of Business at my Black Educational Theatre, San Francisco, 1972, "And stop teaching your actors that freedom, justice and equality. Don't you see they are free? Look how wild and crazy your actors behave. All them people teaching freedom, justice and equality are dead, don't you see that? Yes, they dead, all those talking about Civil Rights, all they got were Civil Rites, and we get Civil Rites at the cemetery, yes, your last rites! Don't you see what I teach my band? I teach them discipline, not freedom, discipline. So stop ruining your actors and dancers with that freedom mess. Teach discipline. How do you think I was able to keep my band together for all these years? Discipline!" I dearly love and respect my Master Teacher, but as I said at the University of Chicago Sun Ra Symposium on Afrofuturism, "Yes, Sun Ra was the master of discipline, yet he was simultaneously the freest creative spirit in the world."  Ironically, our dearly departed ancestor James Sweeney, Jr., said of myself, "Marvin X is the freest black man in non-free America." So I honor my mentor and associate Sun Ra for the wisdom he taught me as the grand master of the Black Arts Movement theatre. No one, in my mind, has come close to expressing the totality of the myth-ritual black arts movement theatre, not Amiri Baraka, August Wilson. Who encompassed music, dance, poetry, song, lights, sound, costume, ritual and myth, (Kemetic and scientifi, i.e., Afrofuturistic), than Master Sun Ra and his Myth-Science Arkestra that continues under the leadership of Marshall Allen, the 94 year old band leader?
If you caught the Arkestra's performance at the SF Jazz Center, you will admit Marshall Allen has taken the band to a higher level artistically, as per a tightened production with a higher level of costume design. Of course, the musician on the keyboards could not replace Master Sun Ra, but the overall performance indicated the Myth-Science Arkestra will indeed be around for Infinity. And for sure the band shall express the low down dirty truth of Master Sun Ra.
In truth, the Marvel film Black Panther, expressed Sun Ra's myth-science in the Hip Hop era, and let us not ignore the Afrofuturism of Octavia Butler, Mother of Afrofuturism. At the University of Chicago, the beautiful, highly intelligent women scholars educated me that Afrofuturism is the black term for the European term of science fiction. But as per my association with Sun Ra, Afrofuturism was not merely a linguistic matter but a functional matter in the deep structure of the esthetics of the North American African people.
--Marvin X
3/22/21
Posted by www.blackbirdpressnews.blogspot.com at March 22, 2021