The Bandung Conference and the Deconstruction of Afro-Asian Violence

Toward the Deconstruction of Afro-Asian Violence 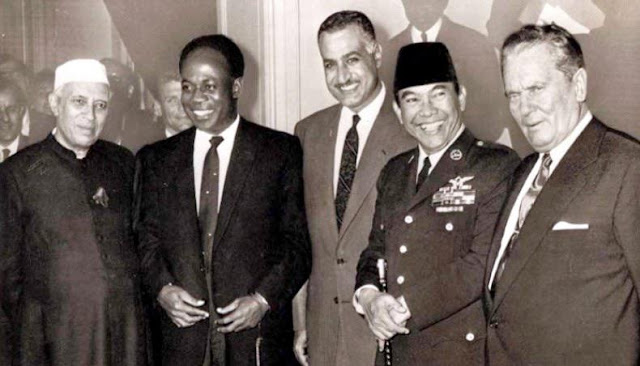 Let us begin at the Bandung Conference that Malcolm X talked bout, that conference which brought together the Afro-Asian world of colonized people to begin the stride toward decolonization. And the process necessitated non-alignment or the disassociation from the imperialist world and the communist regimes. Yes, the Afro-Asian peoples came together in unity for their interests, transcending the Left and Right agendas of the socalled cold war powers originating from World War II and colonialism. The 50th and 60s brought about the liberation of many colonized peoples throughout the world, e.g., Africa, Asia and Latin America.
At the 1955 Bandung Conference, the colonized peoples or recently liberated peoples came to a consensus that they would not be slaves of the East or the West, but non-aligned. They came to a consensus that they shall stand independent of global ideologies no matter what persuasion, left or right, capitalist or communist.
The Bandung ideology persisted through decades of global strife, especially as the decolonized nations strived towards freedom, although, in truth, few achieved their goal of national liberation. Most became stuck in the quagmire of neo-colonialism. Kwame Nkrumah said it best in numerous books and essays, e.g., Neo-Colonialism, the last stage of imperialism. He told us how the imperialists play possum with their sham independence, including the education of a colonial elite (black studies tenured Africans and negroes), a national anthem but an European controlled economic system with the Afro and Negro Europeans programmed to worship all things white in the night and in the day.
So let us go then into Covid 19. Let us note psychology 1A teachers us about misplaced aggression. So we must understand the truth of Covid 19, not the fake news from the right or left. If truth be told, we understand Covid 19 begin in a lab at the University of Texas, Austin, then transferred to a lab at the University of North Carolina, Chapel Hill, then arrived at Wuhan, China. Of course we don't accept the mythology that from the Wuhan lab Covid 19 somehow arrived at a market and a bat was infected that infected the world, yes, world, world, world.
No matter, the globalists had been hatching a germ warfare agent for decades, suddenly Covid 19 appeared and the pandemic was on. The immediate response was to blame the Chinese but those with a modicum of knowledge are fully aware the Chinese work in tandem with the Globalists, i.e., European and American Globalists, technocrats, and most especially Democratic Party leaders and sycophants, i.e., Democratic Socialists.
It matters not to the Chinese, Democratic Party, Democratic Socialists, or any other sycophants on the left, or right for that matter, how many Black people suffer death as a result of Covid 19.
But, it matters to a certain segment of North American Africans that so many of their peoples were suffering as the result of the Covid 19 germ warfare. Oh, shit, yes, I said, germ warfare. Yet, I do not put the total blame of the Chinese since I have clear evidence this germ warfare is a conspiracy that transcends race and ethnicity.
But having said this, does one think in the minds of North American Africans, there does not exist the thought that possibly the Chinese are responsible for the death of their loved ones?
Surely, it is possible in our communal mental trauma and unresolved grief that we would suffer misplaced aggression and attribute our woes solely to the Chinese? No matter that the origin, I repeat, morphed from American labs at the University of Texas, Austin, and the University of North Carolina, Chapel Hill, North American Africans are in such grief and suffering that they cannot distinguish China from America, and most certainly a combination thereof.
In my conclusion, I revert to the 1955 Bandung Conference of Afro-Asian Unity, and I call upon all conscious peoples in the Third World to recognize our bonds of unity in the blood of colonialism, to gather our mental equilibrium and not be swayed by pseudo-Asian racism when we know the real enemy is beyond color, class and caste, beyond gender.
Let us know act in ways ignorant of the deep motions in the ocean of our liberation. IFI. the Chinese are not our enemy, nor other Asians. In truth, we are our own worst enemy, nobody else, not the white man, brown or yellow man.
What are we told about the greatest Jihad, "The Greatest Jihad is to win your own soul!"
--Marvin X/El Muhajir
3/22/21
Posted by www.blackbirdpressnews.blogspot.com at March 22, 2021