"Berkeley, the biggest little Mississippi in the world!"--Marvin X
"Being Black ain't so bad, it's just inconvenient!"--Old Black woman

I went to Berkeley Rep Friday evening for the preview of Anna Devere Smith's new play about the school-to-prison pipeline. Very absorbing. An opportunity to contemplate racism that turned into  an opportunity to experience racism. The theater is doing outreach to bring Smith's play an audience beyond its typical white, upper middle class Berkeleyite. My friend K., who happens to be a white, Mohawk-wearing lesbian, invited me and four other blacks. K. stayed in the lobby waiting for another friend but directed three of us upstairs, center front row - great seats!

A young white female usher looked at our tix, stamped general admission, and refused to seat us. Okay. We politely pointed out the reserved seats. No go. Okay. We waited a bit, saw two friends (black) sitting in the seats and went in. As soon as we got seated, the usher came over to unseat all five of us. We showed her K.'s names on the reserved signs on each seat. She said the seats were for the tech crew. We begged to differ, politely. She walked away.

Momentarily, a young black female usher came over and politely asked us to move. We politely told her about K. She was adamant that we needed to sit somewhere else, but we adamantly pointed to K.'s name on the seats. We concluded that she had been sent as a black emissary (used to be called Uncle Tom) to get these Negroes out of these prime seats. Finally, K. arrived with her other friend (white). And it became clear to all that we weren't trespassing. I settled in and soaked up the theatrical racism, keenly aware of the audience being about 80% white, of the scarcity of black males in the venue, of the abundance of black female ushers, and of my group's profile - novelist (me), entrepreneur featured in Fortune mag, doctor's wife, non profit exec, labor leader. Thought of Dick Gregory (what do you call a black man with a Ph.D.?). Enjoyed the provocative Anna Devere Smith. Enjoyed my friends. Didn't appreciate the bull. 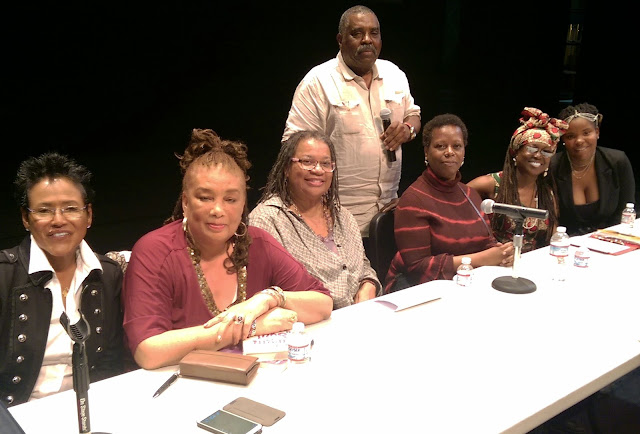